It’s early days in the challenge to understand how digital out of home and social media integrate, amplify each other and deliver effective comms. Both channels are relative newcomers but do already show signs of developing a potentially supportive relationship. Social media is a channel for constantly refreshed comment, content and activity usually conducted on a personal level. Digital out of home is a connected medium capable of delivering dynamic content and interactivity with huge scale in a very public manner. So how are they being used together? 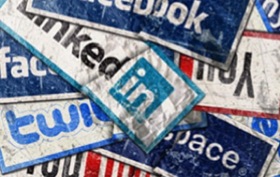 So far we see two distinct trends: either the DOOH activity has been planned to amplify a primarily social media campaign, or social media has been the means of drawing attention to the digital out-of-home activity. With the former, content from social media channels is delivered dynamically to digital out-of-home media. In the latter, more often than not user generated content is produced through engagement with outdoor media, and then subsequently delivered to social media channels. The distinction in these approaches can be clearly seen in a number of the campaigns Grand Visual has produced recently as well as other notable campaigns we weren’t lucky enough to work on.

Wieden+Kennedy’s “We Want Piers” campaign for Visit Wales used digital out of home formats to display content pulled from the campaign’s Facebook page, Twitter feed and YouTube channel. The purpose of the DOOH was to complement what was a social media campaign, as Piers Bramhall and his girlfriend Emma Foley went on their first “proper holiday” to Wales. According to W+K creative director Ray Shaughnessy, the digital OOH element was a great way of keeping people “in the loop of the adventure as it unfolded.” In a sense the digital OOH was a window onto the content in the social space – a taster. 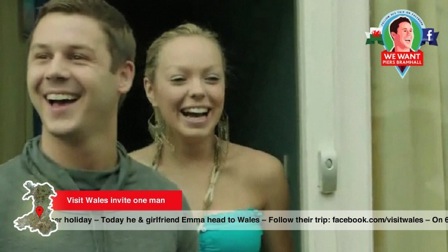 By contrast, the recent Foster’s Gold Smart/Casual campaign from Adam & Eve, used interactive screens at bus shelters to offer an entertaining experience – inviting people to dress up in a “smart/casual” outfit selected from a digital wardrobe and then share the resulting images online with friends through the brand’s Facebook page. The DOOH activity provided the primary channel for consumer interaction, there being no online equivalent, and the Facebook page was used to focus attention on the outdoor creative rather than the other way around. Although, the digital out-of-home complemented a wider media plan, the bus shelter interactive was the event.

If other media is interactive, why not posters?

Indy Saha, Being London’s former Chief Strategy Officer, points out that “if consumers’ habits around other media have become interactive, participative, in real-time, then why haven’t posters evolved in a similar way? Why don’t we turn the poster site into an actual event itself, rather than something you could walk by and easily miss?”

That thinking lay behind the British Airways’ Caribbean Destination campaign, developed by Being in March this year. The BA campaign used social media to draw attention to a live, interactive event on Ocean Outdoor’s Eat Street site at the Westfield shopping centre in West London. “One of the things that we didn’t want to do on Facebook, quite deliberately, was allow the same level of interactivity that you could have while you were there, because we wanted to create this sort of ‘by appointment’ event feel”, explained Saha.

A similar principle proved effective for the Hyperspace produced Mini Countryman campaign which took the old idea of “how many people can you fit into a Mini?”, and gave it a decidedly modern twist. Using digital production techniques members of the public could be filmed at a live site, then be projected onto the inside of the windows of a specially constructed model of a Mini Countryman, creating the impression that many people were squeezed inside the vehicle.

Users could contribute video and photographs of their participation to the brand’s Facebook page, raising further interest and driving traffic to the nine installations around the country. The campaign resulted in 12,000 people participating, hundreds of videos being shared on Facebook and through email, and hundreds of interactions being streamed to the Mini site. The campaign also won a Festival of Media award.

A foot in both camps

Whilst the majority of social media integrated campaigns have fallen into one of the two camps described above, occasionally campaigns have a foot in both. A good example of this is the Colgate “Keep Britain Smiling” campaign from July this year. Created by VML London, the campaign aimed to collect one million “smiles” throughout the summer. Colgate pledged to turn the collected smiles into a £100,000 donation to the Barnardo’s charity. People could upload photographs of themselves smiling to the campaign Facebook page as well as comments and “likes”. All input added credits to the “smile-o-meter”.

Using Grand Visual’s OpenLoop platform, the posted photos were dynamically fed to digital OOH sites to provide a nationwide gallery reflecting and showcasing the online activity. In addition, the campaign also featured an experiential event at the Westfield shopping centre in which shoppers were encouraged to “share a smile for charity” by having their photograph taken, with the resulting images instantly screened on a large digital billboard and on the campaign’s Facebook page. The campaign was able to use the experiential event to raise the profile of the social media activity, and vice versa. 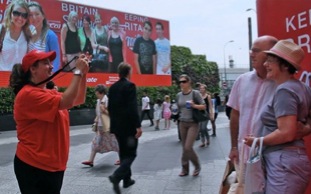 So it looks like these two channels may become powerful bedfellows particularly as mobile takes a leading role in facilitating social interactions. If there are any learnings thus far they are that for digital OOH to amplify social activity it is key that any infrastructure and bandwidth issues are tackled and that the rules of communicating to an out of home audience are upheld – keep it simple! For interactive activity in outdoor to work well and translate to social, it is important to deliver both an easily accessible experience and a simple process for generating and contributing content. As Indy Saha points out “You need to look at user experience. If you can make it seamless… That’s when I think it will start taking off.”