Welcome back to another Top 5 countdown! Today we’ve narrowed down our favourite dynamic campaigns to just five (plus some honourable mentions).

If you missed the last countdown, where we picked our favourite augmented reality campaigns, you should definitely check that out.

So drum roll please… in no particular order, here are our top 5 dynamic digital OOH campaigns.

To celebrate the end of another great year, Spotify revamped its popular campaign “Wrapped” with a dynamic, digital OOH twist! Spotify’s premium users were encouraged to sign up for a breakdown of their year in music – for the chance to appear on iconic billboards including Times Square and Piccadilly Lights. The campaign gave over 7000 ordinary people the chance to see their name in the famous lights. What an awesome way to wrap up a year!

To encourage New Yorkers to explore their exciting city, Google launched this contextual, digital OOH campaign. Based on Google Maps’ latest features, the campaign made the public aware of new places and even reminded residents to check out places that they haven’t visited in a while! We love this campaign as it’s messaging continuously evolved based on what was going on at the time. Live in the Summer of 2018, “Introducing Explore” went on to win a silver OBIE!

In a digital OOH first, cybercriminals were unknowingly behind this unique campaign for Hiscox Cyber Live. To drive awareness of cybercrime to small businesses, the campaign creative was responsive to real-life cyber attacks. As each attack took place, a spot on the poster would flash and pulse. A dynamic campaign that was truly unique, Cyber Live went on to win numerous awards including “Campaign of the Year” at the Campaign Media Awards 2019. 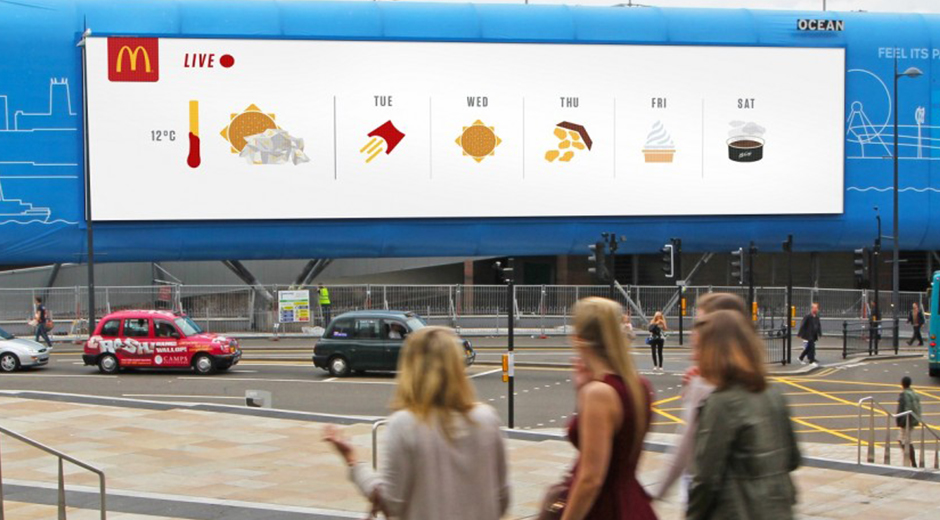 We’ve seen a few dynamic weather campaigns over the years, but none as innovative as the Iconic Weather Forecast. Taking advantage of the ever-changing UK weather, McDonald’s decided to forecast the weather with a savoury twist. Overturned fries became rain, cheese-burgers became sunshine and chicken nuggets became snow… A chip dipped in sauce became the nation’s thermometer! The dynamic campaign was so popular in fact, that it ran for a second year in 2019.

Benadryl came to the rescue for hay fever sufferers with this clever, dynamic campaign. When pollen counts across the UK were irritatingly high, the reactive-creative alerted sufferers, prompting them to take action with Benadryl. Winning multiple awards, including a COOH award, the successful campaign was re-booked every summer for three years.

It was so hard to pick just 5 dynamic campaigns, that we had to add these honourable mentions as well… Enjoy!

Specsavers owned trending news and gossip with this hilarious campaign; prompting consumers to ask themselves if a leaking phone was more important than regular eye tests…

Exploring London was made easier than ever with this data-rich campaign for Google Outside. The digital OOH campaign went on to win two Cannes Lions later that year.

The out-of-home industry’s leaders encouraged other industries to “Get Out of Home,” with this tactical campaign.

We hope that you’ve enjoyed these campaigns as much as we do; stay tuned for our next countdown!