The Evolution of OOH in a Digital World

We explore this progression, and how one of the world’s most iconic brands has continued to push the creative limits over the years.

Before the birth of the internet, and before advertising turned digital, there were four traditional formats of advertising media. These were print, radio, TV and out of home (OOH). Although all four of these media formats are still being used by marketers today, there is notable continuous growth in just one. Out of home. But why OOH? Why is it cutting through the noise and outperforming other traditional formats?

Described by some as “essential as electricity,” the internet has caused the traditional advertising landscape to fragment considerably and has escalated the need for traditional ad formats to evolve.

Once fully static, OOH advertising was as simple as a poster. Fast forward to the present, and digital OOH incorporates video, it’s interactive, and can even include things like AR and AI. It’s thanks to digital innovation, that OOH is the only traditional advertising format to experience consistent growth globally over the last decade. According to the latest Magna report, this growth was around +4.1% per year for ten years.

In order to really demonstrate the evolution of OOH, we took a look at a brand that has embraced OOH from its infancy way back in 1886. We are of course talking about Coca Cola. Evolving from posters and bulletins to full motion creative, we’ve had the pleasure of working on several campaigns for the iconic brand.

Since the brand’s inception, Coca Cola has been the poster child for OOH advertising in its efforts to drive brand awareness and profit. For over 50 years, the brand has even maintained a long term holding on one of OOHs most premium spots, the Piccadilly Lights. 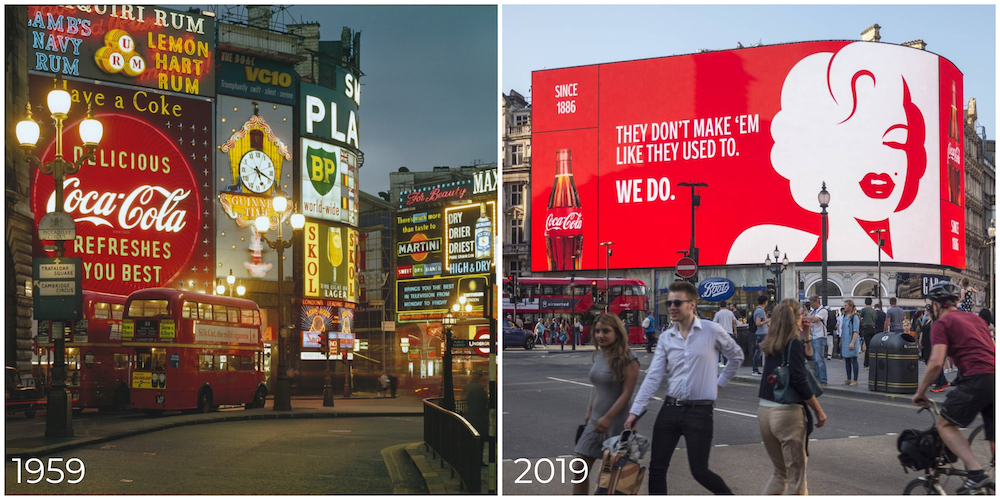 When asked in 1959 why Coca Cola championed the value in this OOH site, Advertising Director Delony Sledge famously said,

“I would not, by any far stretch of the imagination, do away with the Piccadilly Circus sign. I am sure that it has added to the extraordinary quality of Coca-Cola all over the world.”

From the 60s to the 2000s, you could say that the brand’s OOH ads have evolved… In 2004, the brand went digital, with one of Coca Cola’s first-ever digital billboards lighting up its long term holding in Times Square. In 2017, it was replaced with the world’s first and largest 3D robotic billboard.

“If we, in presenting Coca-Cola to our consumers, are content to do ordinary things in an ordinary way, we must of necessity be content to become, and remain, an ordinary product.”

In 2018, the brand further extended the boundaries of DOOH. For Coca Cola’s support of the FIFA World Cup, we created a unique augmented reality experience that enabled fans to ‘play’ alongside Xherdan Shaqiri in Zurich whilst he was in far away in Russia.

It’s great to see brands like Coca Cola embracing OOH as a core part of their marketing strategy and pushing the medium forward to greater creative endeavours – and they aren’t the only ones doing so! Even digitally native companies like Spotify, Amazon and Netflix are increasing their spend in OOH, across major world markets.

As the evolution of OOH continues with companies across the digital OOH ecosystem investing in smarter, faster, more technologically advanced systems. The momentum shows no signs of slowing down, and we are excited about the part we play in shaping the future of digital OOH.