Shocking new data on air pollution reveals that nearly 8 million (25%) addresses in the United Kingdom have air pollution levels above World Health Organization limits. The data comes from addresspollution.org, which has today rolled its London pilot out nationally. Air quality reports are now freely available for every UK address.

The initiative, by AMV BBDO and policy activist group Central Office of Public Interest (COPI), is also attempting to drive legal action to force the disclosure of air pollution ratings within the property industry. This would mean estate agents, property websites, surveyors and conveyancers are obliged to disclose air pollution, in the same way they have to disclose other deadly substances, such as asbestos. An explosive 20-page Queen’s Counsel legal opinion, released with the campaign, reveals a ‘strong legal argument’ estate agents will be negligent for not doing so. 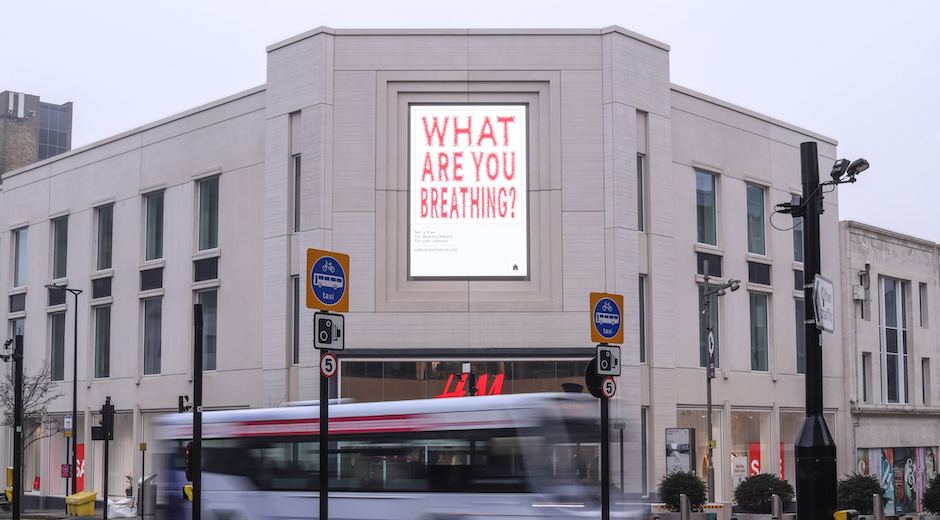 Originally launched in 2019 as a London pilot, addresspollution.org received nearly one million visits at launch. Off the back of that success, funding was secured to commission 1.5 billion new data points from university Imperial College London.

addresspollution.org can now reveal the levels of three toxic pollutants anywhere in the UK in an easy to understand Air Quality Report (AQR). The health implications for living at the address are also given. People are then urged to sign a petition demanding that estate agents and property websites disclose air quality to buyers and renters.

The rating system, approved by experts at the Environmental Research Group at Imperial College London, needed to be simple. It combines information design, brand identity and graphic design to make an invisible killer visible.

Scott, Art Director at AMV BBDO, says: “We’re dealing with concentrations of pollutants measured in micrograms per cubic metre. On top of that, there are three different pollutants and they’re all invisible. We had to communicate complicated information quickly and efficiently, while nodding to the toxicity.”

Designer Director Mario Kerkstra adds, “Air pollution exists on a microscopic scale but its effect on lungs, the brain, heart and even the womb is profound. We needed a visceral way of expressing the different levels of air pollution in more than a coloured banded system. Spikes exist in nature as a warning sign, a sign of danger. They felt right for this.”

The agency has created a hard-hitting national campaign launching the system which visualizes the damage invisible air pollution causes. The campaign centres on geo-targeted animated digital ads featuring spiky typography which ‘breathes’ according to the air pollution at that location The ads are running across 651 digital out of home screens around the UK. The media sites were donated by Open Media, Foris Outdoor, City Outdoor, BlowUp!, JCDecaux, Clear Channel Outdoor, Alight Media and Global Outdoor. 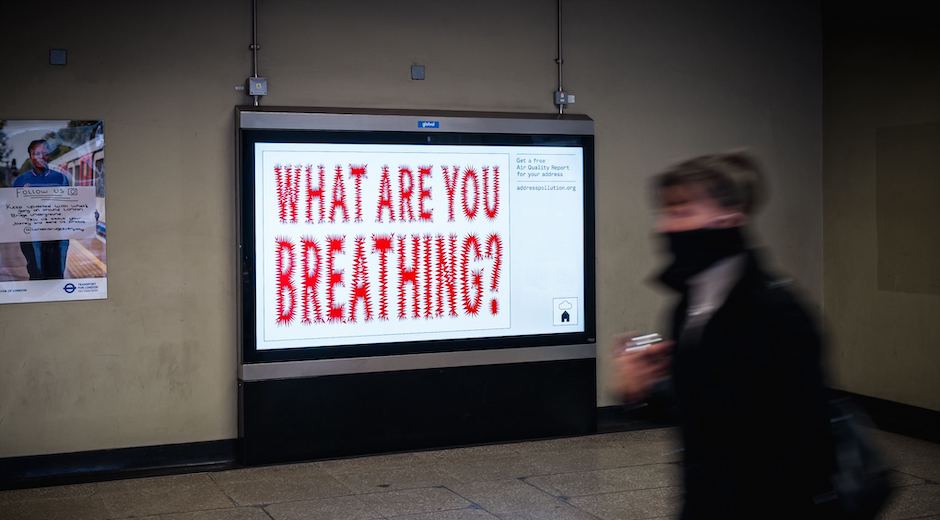 A blitz on Instagram will also see a number of posts exposing the high levels of pollution in different sites in the UK. The strong, eye-catching social media pieces also feature different organs, such as breathing lungs covered with spikes. Funds to get the addresspollution.org pilot live were originally raised through a successful Crowdfunder campaign, making this a truly people-powered campaign.

Humphrey Milles, founder of the Central Office of Public Interest, said: “Air pollution affects everyone. It is a dangerous, invisible killer. With this national roll out, it would be shameful for the property industry to not start acting in an honest, transparent way. Lives depend on it. Everyone has a right to know what they’re breathing. And with the public finally able to see this invisible problem, the government will need to swiftly act to bring air pollution levels down.”

The data-driven approach breaks new ground for AMV BBDO. Copywriter Ben Polkinghorne says, “Back in 2019 we were asked to come up with an idea that tackles inaction on air pollution. Little did we know we’d end up spending our time developing a rating system with scientists and uncovering legal loopholes. We’ve literally been living and breathing the stuff for years, so it’s fantastic to get this next phase of the project out into the world.”

To get a free air quality report for your address and sign the petition, visit addresspollution.org.